Your Cart is empty.

Ginseng Benefits: Everything you need to know about it

There’s a common notion that Ginseng and Ginger are siblings. We won’t be surprised if you share a common belief. Similar looking color and shape call for all the more reasons for sharing their hereditary.

But they aren’t! Although both are roots— they both have different origins/profiles and perform differently, functionally speaking. In this piece, we’ll be looking at the nuts and the bolts of ginseng. So let’s quickly understand it.

Ginseng is an extremely slow-growing, short plant that did not sprout recently. Chinese have been using it since 196 AD (as far as the first written text is concerned). That’s unbelievably long, considering not many are aware of it as much as they’re about other root edibles.

Chinese have called it supertonic for centuries; however, it continuously refrained from addressing it as “all-cure” natural medicine.

It almost takes up to 4 to 6+ years for harvesting. And it depends on how long you want the roots. The fleshy roots come in three famous variants: fresh, white, and red.

While the fresh ginseng can be harvested within four years, the white ginseng takes anything between four to six years. Red ginseng is the one that takes the most time, i.e., more than six years, but its therapeutic potential is worth the wait.

We wouldn’t say the American ginseng (Panax quinquefolius) and Asian ginseng (Panax ginseng) have the monopoly over ginseng herbs as there exist many other types. But yes, both the regions dominate ginseng production.

Again, both the ginseng types differ from each other in terms of their profiles, potencies, and effectiveness. The Asian herb harvests red ginseng as a herbal supplement. Its medical power is stored in its roots.

We’ll cover red ginseng more than white or fresh as it has gained traction as a popular herbal supplement of late.

Although you can consume red ginseng roots directly, there are somehow better means to have them. Here are the two main reasons.

First, the roots can be hard to chew. Second, you can’t have a calculated and calibrated version of medicinal chemicals in red ginseng, which can mostly end you up over or underdosing.

Thus, red ginseng is beaten into useful dietary and non-dietary supplements that help you measure intake. Whether it’s red ginseng capsules or red ginseng powder, the makers extract herbal chemicals (ginsenosides and gintonin) from the roots and convert them into concentrated supplements.

The Benefits of Red Ginseng 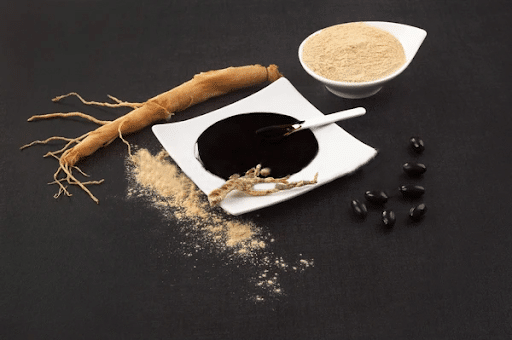 As these ginseng supplements are reaching more households in a flurry, it’s crucial you know all their benefits.

Some studies strongly suggest red ginseng and its compound ginsenosides have antioxidant properties. [1]

The test-tube, as well as human models, have shown promising anti-inflammatory responses from Korean red ginseng. [2]

Red ginseng is supposed to increase antioxidant activities to get control over oxidative stress. [5]

Korean red ginseng has demonstrated improvement in brain functioning with anti-free-radicals properties such as mood, behavior, cognition, and memory. [6] [7]

Usually, free radicals can wreak havoc on the brain which detriment mental health, mood, and social functioning abilities. But ginsenosides and compound k have indicated positive signs in taming cognitive dysfunctionality. And also helped with neuroprotection in test-tube and animal models. [8] [9] [10]

However, the effect of red ginseng toned down after eight weeks, suggesting it’s just a treatment and not a permanent cure to the cognitive impairment.

Another study on ginseng emphasizes how low doses of the herb affect brain function and behavior in people with Alzheimer’s disease. The sense of calmness and settled mood, that ginseng induces calls for a sure-shot addition to your dietary habits. [11] [12]

3) May Help in Erectile Function

Erectile dysfunction (ED) is more common than it seems, as oxidative stress in blood vessels and tissues in the penis continues to torment men with their broken intimate life. [13]

But Chinese have been using red ginseng as a potential treatment for ED. In fact, research from trusted sources highlights ginseng as a great natural alternative for treating ED. [14] [15]

It’s suspected the healing compound in ginseng reduces oxidative stress in the vessels and dilates them for better blood flow in the penis. The process is called vasodilation, where the muscle walls relax in the blood vessels, thereby allowing more blood flow.

Basically, the lack of nitric oxide in the system constricts blood vessels, preventing blood circulation in the penis. The antioxidative properties in ginseng promote nitric oxide production followed up by penile blood flow. [16] [17]

Another comparative yet surprising study between Korean red ginseng and ED medication revealed the former improved 60% of the ED cases. In comparison, the latter enhanced blood flow in only 30% of the cases.

4) May Enhance The Immune System 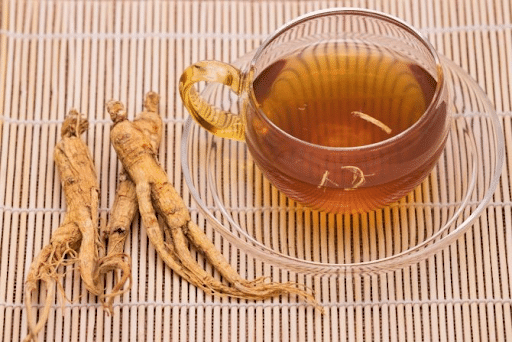 When it’s about alternative medicines, one can’t keep the immune system out of the picture. Red ginseng, like other organic items, has shown immune system strengthening.

One study strongly supports the idea of immune building in patients undergoing chemotherapy treatment, especially the ones with stomach cancer. The ginseng treatment reduced therapy side-effects and symptoms. [18]

In another anecdote on stomach cancer, respondents presented red ginseng as a potent immune booster compared to the placebo group. [19] Moreover, a study was vocal that people who added ginseng as an edible supplement in their lives had 35% higher chances of living life without another disease for at least five years than the ones who didn’t take it. [20]

Although we have respondents sharing their positive experiences with red ginseng, we need human-controlled studies on it.

Red ginseng has also worked out as an energy-enhancer when the going gets tough in the day. It has been shown to fight chronic body fatigue. The research suspects ginseng to have energy components like oligopeptides and polysaccharides, that eventually lead to cells’ energy production. [21] [22] [23]

One of the studies indicated that respondents given ginseng had medium to low mental and physical fatigue. Its antioxidant properties played a vital role in elevating the energy levels when set side by side with placebo. [24]

Another study on cancer survivors measured them to have a lower fatigue level than those given placebo therapies. [25] Ginseng got another feather in its hat when one study suggested it not only combats mental fatigue but also charges people up physically. [26]

How Do You Choose Red Ginseng?

When you’ve decided to go for red ginseng supplements, it’s vital you know the tidbits of it. Mainly because it comes in various forms, and you need to consider its purity to make it look more convincing. There have been instances when contaminated ginsengs with chemicals, metals, and impurities got shoved into the market.

After all, impurities affect its credibility, and you end up compromising the health benefits. You would like to consider researching manufacturers and brands before buying one. Make sure the products are third-party laboratory tested.

Things to Remember While You Have Red Ginseng

You learned… that ginseng and ginger are not siblings.

You learned… that ginseng is an extremely short plant Research with its central therapeutic power stored in the root.

You learned… that ginseng has many forms, of which Asian and American are the most popular.

You learned… that the red ginseng supplement is measurable instead of chewing it directly.